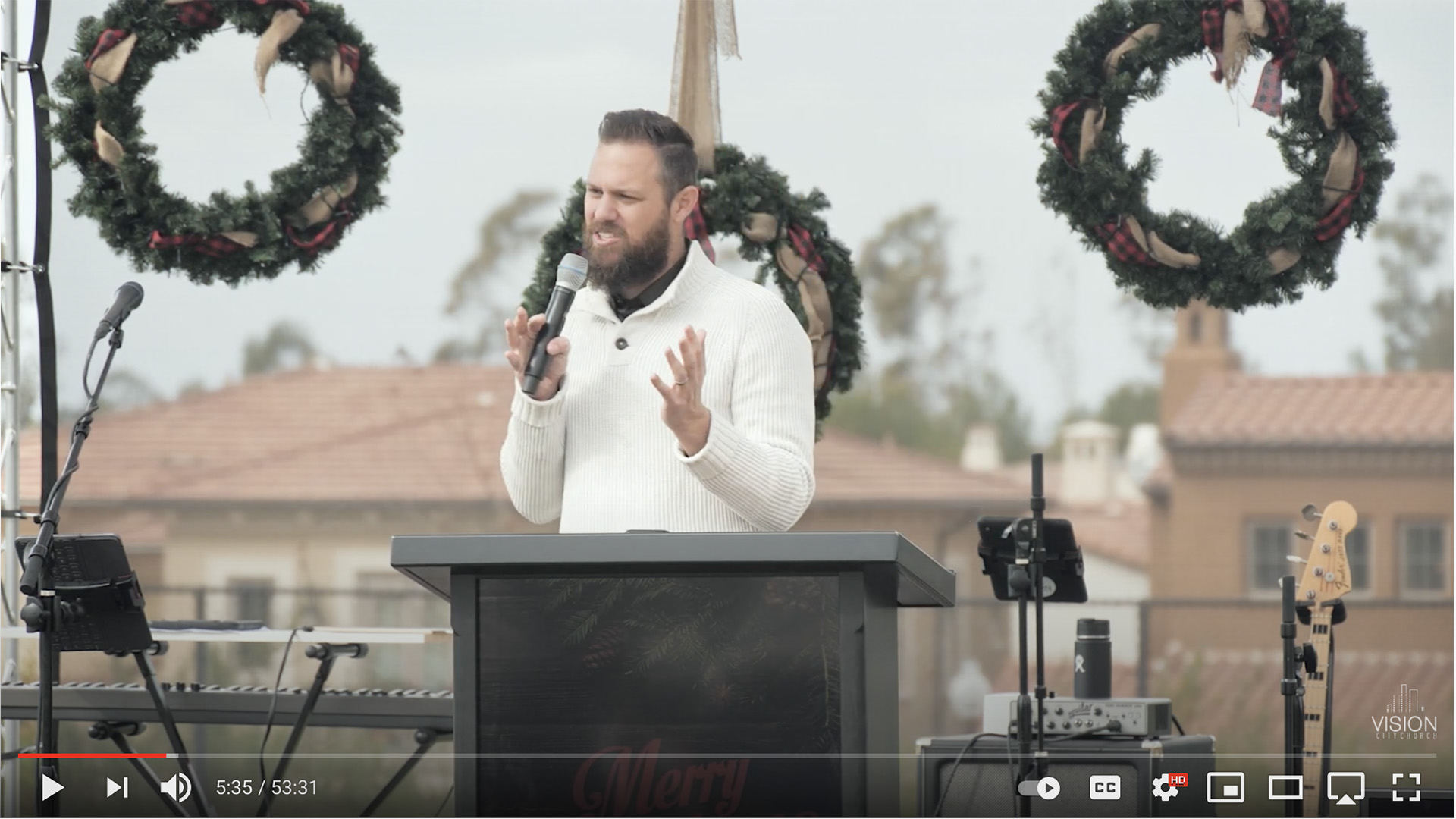 By Josh BlevinsOctober 12, 2018No Comments

The Bible conveys an interesting principle for believers. Our lives are to be full of decisions and actions that are carried out, “In Jesus name.” What’s in a name? Well, when it comes to Jesus, just about everything. When I do something in Jesus name, I’m declaring that I’m reflecting His character, communicating His heart, and expressing His will. To the Colossians, Paul the Apostle writes, “And whatever you do in word or deed, do all in the name of the Lord Jesus, giving thanks to God the Father through Him.” Notice it’s not just big things we do, but all things. Jesus even told us that sharing a cup of water in His name with someone who’s thirsty goes down in heaven’s record books.

What does this have to do with voting? I believe that if Jesus cares about water, he cares about your vote. As a Christian, when you vote with the name of Jesus attached to it, the policies you’re voting for or against do matter. I could wax philosophical right here, but instead, I’ll get right down to the practical. I’m going to give you a few reasons why I believe the Bible calls the American Christian to actively and prayerfully participate in the process of choosing their leaders and laws.

1.) It’s a matter of good stewardship – “Moreover it is required in stewards that one be found faithful.”

In writing these words, Paul was speaking about the great weight of responsibility he had as an Apostle and ambassador for Christ. Paul wanted to be faithful to steward his ministry in a way that honored the Lord, but the principle of stewardship applies to all that God has entrusted to us. It’s safe to say that in America, God has made us stewards of some of the greatest gifts ever granted to a nation in the history of the world: Liberty and freedom. These are things that must be nurtured by righteousness. I love what author and Christian philosopher Ravi Zacharias wrote,

“Democracies that are unhinged from all sacred moorings ultimately sink under the brute weight of conflicting egos. Freedom is destroyed not only by its retraction; it is also devastated by its abuse.”

Please ask a persecuted Christian in an underground church in North Korea what they would do if God granted them the opportunity to have a voice in choosing their political authorities and governing laws. Oh wait, you can’t because they don’t. I think their answer might be something like, “The Lord has been faithful through the trials, and our faith is in Christ… now, where’s the nearest ballot box?” Don’t forget that Jesus told us, “To whom much is given, of him much will be required.” Simply put, we should vote because we can. Your vote is not the gospel, but that doesn’t mean God is indifferent toward how you use it.

2.) Because godly leadership is a blessing for everyone – “When the righteous are in authority, the people rejoice; but when a wicked man rules, the people groan.” (Proverbs 29:22)

Jethro, the father-in-law of Moses, had some good advice for his son-in-law when choosing leaders for the people of Israel. In Exodus 18 he says, “Moreover you shall select from all the people able men, such as fear God, men of truth, hating covetousness; and place such over them to be rulers of thousands, rulers of hundreds, rulers of fifties, and rulers of tens.” Certainly good and godly advice! “But Josh,” you say, “we don’t always get the opportunity to vote for a righteous person, so why vote at all?” You might be right! We might not always have the cream of the crop to choose from, but our options are probably better than Emporer Nero. Think of it this way. All your bananas might be too ripe to enjoy on their own, but you can still make delicious banana bread. If you can’t find a righteous person, vote for the most biblical policies out of the ones represented. Please do the hard work of looking at the policies of parties and candidates, asking, “How do these things fall in line with what matters to God?”

3.) Righteous laws are necessary in a sinful world – “But we know that the law is good if one uses it lawfully, knowing this: that the law is not made for a righteous person, but for the lawless and insubordinate, for the ungodly and for sinners, for the unholy and profane, for murderers of fathers and murderers of mothers, for manslayers, for fornicators, for sodomites, for kidnappers, for liars, for perjurers, and if there is any other thing that is contrary to sound doctrine…” (1 Timothy 1:8-10)

Where wickedness exists, the gospel is needed, where the gospel is rejected, justice is required. Proverbs 14 says, “Righteousness exalts a nation, but sin is a reproach to any people.” Righteous laws protect a nation from implosion and keep it from heaping judgment upon itself. They also protect the nation’s citizens. As Christians, we should keep in mind that we have an opportunity to speak into the laws that govern our society. The closer those laws can look to the standards of God, the better off our nation will be. I love these words from John Adams, a signer of the Declaration of Independence and the 2nd president of the United States. He penned,

“It is religion and morality alone which can establish the principles upon which freedom can securely stand. The only foundation of a free constitution is pure virtue.”

4.) It’s an opportunity to shine the truth – “You are the salt of the earth; but if the salt loses its flavor, how shall it be seasoned? It is then good for nothing but to be thrown out and trampled underfoot by men. You are the light of the world. A city that is set on a hill cannot be hidden. Nor do they light a lamp and put it under a basket, but on a lampstand, and it gives light to all who are in the house.” (Matthew 5:13-15)

The most significant light we have is the light of Jesus within us. This light is the truth of His gospel and salvation and His love and mercy, but it is also the truth of God’s righteousness and holiness (Romans 1:18). Consider the ministry of the Holy Spirit. The Holy Spirit calls people to Christ, but he does so by convicting them of sin, righteousness, and judgment (John 16:8). As Christians, filled with this same Holy Spirit, the political policies we champion ought to reflect both God’s love and God’s righteousness. In Ephesians 5, Paul strongly commands the Christian, “And have no fellowship with the unfruitful works of darkness, but rather expose them. For it is shameful even to speak of those things which are done by them in secret. But all things that are exposed are made manifest by the light, for whatever makes manifest is light.” This command is not a call to a witch hunt, nor is it a call to be merciless. It’s not an encouragement to get bogged down in unprofitable arguments and political mire. The Christian’s life, when walking in the Spirit, should naturally expose the darkness that surrounds it. The light of God in the Christian can expose the darkness of the LGBTQ lifestyle while welcoming the individuals within that lifestyle to find a new identity and forgiveness in Jesus Christ. The light of God will reveal the barbaric nature of elective abortions while offering the most authentic source of healing and help for those who have failed. The light of Christ will expose corruption while walking in sincerity and truth. The light of God will expose injustice and hypocrisy, all while maintaining humility.

Let’s face it, there is no “perfect” way to vote as a Christian, maybe not even a “best way” to vote, but I believe there is a “better way” to vote. The question one must ask themselves when voting is, “Is my vote shining more light or excusing more darkness?” Every human politician and political party will do something unrighteous, and one day they will have to take responsibility and answer before God. For the Christian, we are responsible for shining how we can, while we can. I cannot personally stomach the thought of standing before God having not done what I could do to speak out against the senseless murders of nearly 1,000,000 babies every year, or the rampant sexual immorality that our society exposes our children to and treats as something to celebrate. Neither can I have a clear conscience about doing nothing to mercifully help those who suffer from sin and need the grace of God in their lives. “Josh, but what about the poor people?” Generously help and care for them in Jesus name. “What about the alien and immigrant?” Love them and give them Jesus. I don’t need a politician to do for me the things I should be doing as a Christian, but I do need a politician to help curb nationwide abortion and to help protect my children against the glorification of sexual perversion in our culture. I can feed the poor, but I can’t shut down an abortion clinic. I can cross comfortable boundaries and reach out to those I disagree with in love, but I can’t keep schools from forcing secularized agendas onto my children. That’s what my vote is for. Of course, there are more issues than the ones I’ve identified. I have personal opinions on many political issues, but the issues addressed in this article are issues that move beyond politics. This is about righteousness and unrighteousness, and what we support or excuse as Christians who want to be godly citizens.

Yes, if you haven’t figured it out yet, I am encouraging a Republican vote this November. I don’t do so because I believe the Republican platform is without error. Neither is it a sweeping declaration of hate toward Democrats or an assumption that they are all wicked people. “Republican” is not my identifier in this world. Above all else, I am a Christian. I see though, with a Republican vote, the most hopeful chance to right some of the most horrific wrongs brought about by people in this generation. “Josh, I’m going to vote for Jesus!” It’s a nice sentiment, but Jesus isn’t running for office. He’s already the King. Unfortunately, we live in a world that has not accepted His kingship, so until He returns, we must do what we can to preach the gospel and stand for His righteousness. This November, vote in Jesus name.

Here are the links to the party platforms as well as the California Gubernatorial candidate’s agendas:

Because it needs to be said...
Thank you, President Trump.

Beware of the world’s Jesus: